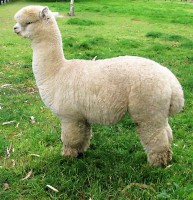 Faberge is a compact, robust male who carries a very dense fleece. He grows a long staple length and still has well defined staples throughout his fleece. His follicle density test came in at 50.7. Faberge has 46 progeny on the ground in New Zealand and numerous progeny in France.

Faberge is a full brother to Silverstream Czar and Silverstream Déjà vu. Pucara Juliana, the dam has produced six cria, five of them have won supreme championships.  Twice his offspring have won the National Alpaca Expo in New Zealand.